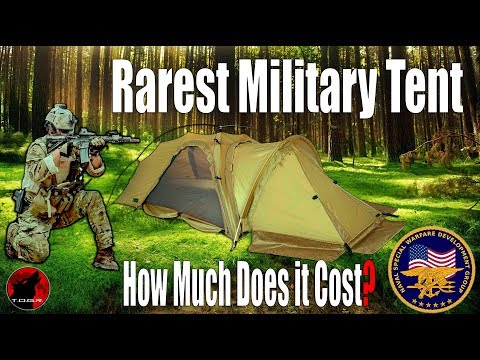 What you are about to see is the rarest military tent in the world and also, it is one of the most expensive.

The design of the tent alone is different than anything that you have ever seen before and this is the Nemo CODA 1.5 SE Military Tent and after 5 years, I finally have one to share with you all!

In 2006 Nemo began adapting their shelter technologies for military appilications which went on to be adopted by specific branches of the military such as the special forces. This line of products was known as Shield and is a sum of over 10 years worth of development with the U.S. Army Natick Soldier Research, Development, and Engineering Center and the U.S. Special Operations community.

With the gear and products which they ultimately released and have been adopted, they have taken on very specific and also very limited roles with the US military;

Numerous tents and shelters were released and I have been shown and demonstrated the use of many of these products including the;

All of which are truly next generations shelter systems especially when you compare them to what has been used and is currently being use by the military. This is especially true with the Advanced Linking Combat System which officially holds the crown for being the most expensive military tent ever made!

This tent and all of the Shield products were never for sale to civilians; only to the government.

With that tent, while being both VERY RARE and also the most expensive military tent for the US government to purchase, there is the CUDA 1.5 SE tent which is the focus of this video.

It is WAY rarer than the already extremely rare ALCS tent and on the open market can fetch prices higher than that of the ALCS.

Where does Shield stand today? That is a good question as all Shield products have been removed from the Nemo web site but there remains a Shield page which is still which states More Info Coming Soon.

All three doors feature an additional zipper track that allows vestibules to be attached or removed. An optional Linking Panel connects using the zipper track over the side doors to complex two or more Coda™ tents together, either facing the same direction, or 180 degrees opposed for better security.

The thing I love about this shelter is its versatility. That 1.5P in the name denotes one man plus his equipment. It features three doors, one on each side and one in front as well two vestibules, a side vestibule and a front vestibule. You take as much shelter as you need along for the haul, whether its just you, or you and your equipment, or you, your buddy and equipment.

Price : The ALCS tent cost the government over $2000 and the CODA was a fair bit less expensive and that is due to the fact that it does not incorporate the specialized gore-tex material but rather, common nylon.

Check out our web site for more information concerning everything seen on our Channel including reviews, insight into what is coming up and a chance to vote and influence our upcoming overnight adventures.

In Subic, the indigenous Aetas continue to protect the rainforest and in return, Nature provides for them. For many years now, they’ve also been sharing their knowledge of the jungle with people outside their community.

Survival in The Tropical Rainforest, ep 43

Survive in the tropical rainforest, episode 43, complete the huts and store firewood Rain can last for weeks and storing firewood is necessary to keep fire. Firewood storage was built with a hut in the […]

Hello to day this i video i want to show you about: Primitive survival skills: finding big Squid at River – cooking Squid eating delicious(09) if you like this video please ckick like share and […]

This is the footage from our Survival adventure on a Deserted Tropical Island off the coast of Malaysia between Malaysia and Thailand. We paid a man with a boat about 20 bucks to take us […]

My personal story with Laminine, live from the tropics of Belize

#Laminine and Omega plus testimonial. My personal story from a Canadian living in the tropics of Belize, Central America. Skype investnow2 for more info